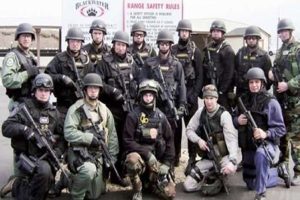 We have written many posts on embassy security and our reliance on private contractors. It’s not that we have a problem with contractors. Our problems center on how some contractors cut corners and how we have become overdependent on them.

An intern I worked with while a prosecutor became a civilian contractor in Iraq during the Operation Desert Storm. He has many stories about how some private security contractors lacked training and discipline while others did a stellar job. As we sit in our homes this Thanksgiving day, tens of thousands of Americans are working all over the world and many are relying on private contractors to keep them safe.

The simple truth is that most embassy security is now outsourced to private contractors. The days of U.S. Marine guards are fading. At home, private guards protect many of our federal buildings too.

Embassy security is of particular concern. Many of the guards that the American security firms hire aren’t Americans. They are local workers. By hiring locals, particularly from war torn nations filled with civil strife, the risk factors increase dramatically. The guards on duty the night our consulate in Benghazi was overrun? Libyans.

A recent lawsuit filed in December of 2019 claims that several private security companies in Afghanistan actually hired Taliban insurgents! That conduct if true (and we believe it is true) violates the Anti-Terrorism Act.

The purpose of this post isn’t to be xenophobic. The further we get from home, however, the more important careful screening and training becomes. The report on Benghazi suggests that the foreign guards hired to protect our consulate and staff did not fire a single shot in defense of the embassy and the Americans inside. They ran away. In fact, there is some concern that one of the guards had been a terrorist 6 months earlier.

When American lives are at stake, we deserve the best guards possible. Properly screened. Properly trained. Properly equipped. Unfortunately, we believe that many of the companies charged with embassy security – and domestic security too – have become lax and place profit over safety.

Men and women working as armed professionals tend to follow a code of silence. When I first became a cop 30+ years ago, a veteran field training officer told me “to do my job, mind my own business and stay safe.” He meant don’t worry about the few officers who were always breaking the rules. Times have changed and the world is a much more dangerous place. Today, doing your job and staying safe means turning in employers that don’t follow the rules.

Much of the fraud against taxpayers and government contractors is discovered when concerned insiders come forward. It is discovered because of whistleblowers.

Congress and the Justice Department recognize that whistleblowers face professional risks. Those risks range from being ostracized to full scale retaliation and job loss. Not only did Congress pass powerful anti-retaliation laws, they passed the False Claims Act that allows whistleblowers to receive up to 30% of whatever the government collects from wrongdoers.

Security contractors that falsely certify training or background screening records are ripping off the government and endangering lives. Because the contracts are funded with taxpayer funds, the False Claims Act kicks in.

If you have inside, original source information about fraud against a government program, you may qualify for a cash award. The government has paid out approximately one half billion dollars in rewards to whistleblowers this year.

In 2011, the former director of operations at Armor Group North America received a $1.35 million whistleblower reward. In 2017, a former Triple Canopy employee received a $500,000.00 reward.

All of our men and women charged with protecting our federal buildings, embassies, military bases and sensitive research facilities are heroes. Those that become whistleblowers and report fraud are the heroes’ heroes.

Think you have information that may qualify you for a whistleblower award? Give us a call. We help whistleblowers obtain the maximum awards allowable. For more information, contact attorney Brian Mahany at or by telephone at (414) 704-6731 (direct). All inquiries kept in strict confidence and protected by the attorney – client privilege.