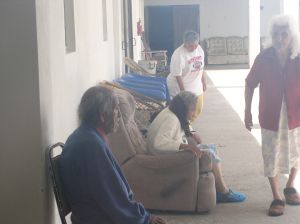 “Lawsuits Rattle Nursing Home Chains,” that was the title of a feature story in the weekend edition of the Wall Street Journal. We call it “Profits over Patients.” Things are so bad at some nursing home chains that they are apparently closing their doors in certain states because of the risks of lawsuits. The nursing homes blame lawyers, of course. But it is local juries that determine how much an injured, neglected or abused patient should receive.

The WSJ story centers around the horrendous conditions that exist at some facilities. Those conditions include an 87-year-old patient, Dorothy Douglas, with Alzheimer’s and Parkinson’s disease who sought care in a West Virginia nursing home. Lawyers say she died shortly after admission and after becoming “dehydrated, malnourished, bedridden and barely responsive.” The supreme court in West Virginia apparently agreed and upheld $36 million of an award ruling that “Heartland Nursing Home was chronically understaffed to the point that it was not able to provide even a life-sustaining amount of water to Ms. Douglas during the 19 days she resided in that facility.”

To qualify for an award, a whistleblower (called a “relator”) must have inside or original source information involving fraud to a government program. Both reckless and fraudulent conduct can qualify.

Typically, mere negligence isn’t enough but we know that some nursing homes routinely lie about staffing levels and claim they have more skilled care givers than are actually on the floor. That’s fraud in our opinion. And if allowing patients to basically starve to death isn’t reckless, we don’t know what is.

We owe our loved ones the best of care when they are no longer able to care for themselves. Senior citizens and disabled patients should never be abused or held in virtual private prisons. Thankfully, concerned staff are coming forward in record numbers and reporting these deplorable conditions. In our opinion, whistleblowers are the new American heroes.

If you have knowledge of Medicare or Medicaid fraud, give us a call. Our whistleblower lawyers help our clients collect the maximum awards available and have already handled several billion dollar cases. Not all cases are that large but every case involving nursing home patients is as important if not more so.

For more information, contact attorney Brian Mahany at or by telephone at (414) 704-6731 (direct). All inquiries are kept in strict confidence.