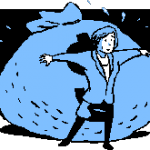 The IRS and Justice Department have filed a civil suit against Deutsche Bank seeking to collect $190 million in taxes. The government accuses the German bank of using shell companies in a complex abusive tax shelter scheme. The lawsuit comes on the heels of $554 million criminal penalty paid by the bank in 2010. That case accused the bank of helping individual customers commit evade taxes through the use of abusive tax shelters.

According to the complaint, Deutsche Bank “acquired a corporation in the fall of 1999 that held stock with a very low cost-basis, such that the sale of this stock would trigger more than $100 million in taxable gain as a result of the appreciation in value of the stock.” To avoid paying tax on the stock’s built in gain, the bank made arrangements with a firm that created three shell companies that served no purpose other than to be stuck with a huge IRS bill it had no ability to pay.

The IRS has been very aggressive in pursuing transactions that have no economic substance and are only designed to avoid taxes. The use of nominee or shell companies in transactions that are not arms length also attracts increased scrutiny. If the allegations of the complaint are accurate, the bank has a tough road ahead.

The government claims that the scheme helped the bank evade $190 million in taxes, interest and penalties.

In announcing the lawsuit, U.S. Attorney Preet Bharara said: “Through fraudulent conveyances involving shell companies, Deutsche Bank tried to make its potential tax liabilities disappear. This was nothing more than a shell game.”

Bloomberg news claims that Deutsche Bank plans to vigorously defend against the charges. The bank claims that the IRS abandoned these claims in 2009.

Abusive tax shelters and tax evasion often go hand in hand. Unfortunately, schemes like this are often marketed by promoters who sell these schemes to unsuspecting taxpayers. Even if there is no criminal prosecution, the IRS civil penalties for having an abusive tax shelter are huge.

If you are under investigation for tax evasion or are being audited for an abusive tax shelter, contact an experienced tax lawyer immediately.

Need more information? Mahany & Ertl is a full service law firm concentrating in IRS matters. Our tax lawyers handle IRS cases nationwide and worldwide. For more information, contact attorney Beth Canfield at (abusive tax shelter) or attorney Brian Mahany at (tax evasion). We can also be reached at (414) 223-0464. All inquiries are protected by the attorney – client privilege and kept in confidence.

There is widespread disagreement when we will reach peak oil. Some very smart folks were predicting we had reached oil years … END_OF_DOCUMENT_TOKEN_TO_BE_REPLACED