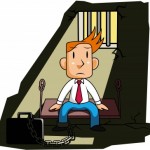 Timothy Jackson, a physician from Pass Christian, Mississippi, was indicted and charged with tax evasion after the IRS says he failed to pay taxes since 2004. Jackson pleaded not guilty and claims he took a vow of poverty. The IRS says in just 4 years alone earned $1.8 million.

According to the indictment, Dr. Jackson affiliated with two churches, the Church of Healing Arts and Sciences and later, the Church of Compassionate Service. Jackson then donated his earnings to the two organizations. The IRS says, however, that his charitable giving was part of an elaborate scam. They say he received back 90% of the money from both churches.

The indictment suggests the scheme was quite elaborate. As part of the scheme, investigators say that he created a “parsonage trust” and subsequently transferred his home to the trust.

Unfortunately, some of the court filings are under seal at the request of the government. That means they are not viewable by the public.

Shortly after Jackson’s arraignment, the government moved to disqualify Jackson’s lawyer claiming he had a conflict of interest. Although much of that record has been sealed, it appears that Jackson’s lawyer is affiliated with the pastor of one of the churches. Jackson suggests that as part of his vow of poverty, he transferred all of his assets and income to the church and in return, the church supported him “by paying his personal and family needs.” (The court disqualified Jackson’s lawyer on March 6th.)

How that defense will work remains to be seen. Obviously, all defendants are presumed innocent until proven guilty. Given the totality of the allegations, however, Jackson has a tough fight ahead.

Jackson is charged with 4 counts of tax evasion and one charge of felony obstruction. The latter charge was brought after Jackson allegedly lied to IRS special agents investigating him. If convicted of all charges he faces 23 years in prison and $1.2 million in fines. The IRS also wants him to pay all his back taxes which could add up to a million dollars or more.

The IRS often announces indictments during tax filing season. Their goal is to dissuade others from trying similar schemes. Phony faith based schemes have been around for decades. The IRS takes a dim view of mail order ministry documents and folks who “donate” to a church only to get the money right back. According to the indictment, that is what prosecutors believe Jackson has done.

In a prepared statement, the an IRS spokesperson  said, “Tax evasion is not a victimless crime. We all pay when others swindle the government. The IRS and Department of Justice remain determined and vigilant in ferreting out such schemes to cheat the honest taxpayers.”

Under investigation for tax evasion or other tax crimes? We can help.  Our criminal tax lawyers have helped people across the United States avoid prosecution and prison. For more information, contact attorney Brian Mahany at  or by telephone at (414) 704-6731 (direct). All inquiries are kept in strict confidence and protected by the attorney-client privilege.

Need more information? Our Due Diligence tax blog has over 1000 text searchable articles.

Belviq, the brand name for Lorcaserin, has been withdrawn from the U.S. market after repeated fears about its links to … END_OF_DOCUMENT_TOKEN_TO_BE_REPLACED