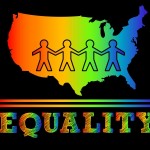 Last month TaxConnections blogger and enrolled agent Steven Potts wrote an article on same sex marriage. While the initial guidance from the IRS was just issued 6 weeks ago, more advice is now available.

Earlier this summer, the Unites States Supreme Court struck down Section 3 of the Defense of Marriage Act – DOMA. That case begins with Edith Windsor and Thea Spyer, a same sex lesbian couple of 40+ years. Tired of waiting for New York state to authorize same sex marriages, the couple travelled to Ontario, Canada in 2007 and married. Canada has long authorized same sex marriages.

Two years later, Thea Spyer passed away. As a married couple, Edith Windsor inherited her partner Thea’s estate. That’s when the IRS stepped in and sent Windsor a $363,000 tax bill! Why? Because DOMA doesn’t recognize same sex marriages, the IRS said that Edith would have to pay inheritance tax. (Gifts or transfers between spouses are virtually untaxed.)

Windsor, in her 80’s, sued the IRS in 2010. After an expedited court proceeding, the trial court and Court of Appeals sided with Windsor. This summer in a 5 to 4 decision, the Supreme Court struck down section 3 of DOMA. That provision requires the term “spouse” to be someone of the opposite sex. DOMA is a federal law meaning it has limited impact on the states.

The court had the ability to declare that same sex marriages were a right protected by the Constitution. They chose not to do so, however, and adopted a more limited view. They also chose not to recognize civil unions and domestic partnerships even though some states treat those relationships like a marriage.

Since the court’s decision, the IRS has adopted revenue ruling 2013-17 which expands on the Windsor decision and provides more guidance for taxpayers and practitioners. Specifically, the IRS looks to the state of celebration to determine whether a same sex marriage is lawful. As of this writing, 14 states and the District of Columbia permit same sex couples to wed. 20 states, however, have constitutional provisions forbidding same sex marriages.

By adopting a state of celebration instead of state of domicile, the IRS avoided many logistical problems. Under their test, it matters only where the couple was married. Thus a same sex couple married in Maine can move to Wisconsin. Although Wisconsin is still permitted to ignore the marriage, the IRS will recognize the union as long as it was legal at the time and place it was entered.

Because states don’t have to recognize same sex marriages, some couples find themselves having to file married single or married joint for federal returns but not being allowed to do so for state income tax returns. We expect far more guidance from the IRS and states as the 2013 filing season approaches in several months. Social security and the Department of Veterans Affairs are expected to weigh in as well.

For more information, contact attorney Brian Mahany at or by telephone at (414) 704-6731 (direct). All inquiries are protected by the attorney – client privilege.

[Photo courtesy of “nongpimmy” and FreeDigitalPhotos.net]

Belviq, the brand name for Lorcaserin, has been withdrawn from the U.S. market after repeated fears about its links to … END_OF_DOCUMENT_TOKEN_TO_BE_REPLACED