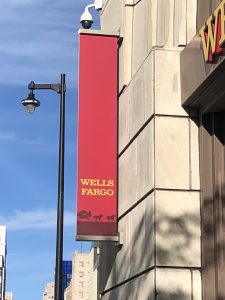 [Post Updated] Lately we have been writing a lot of stories about Bank of America. It seems America’s biggest bank is also the most inept. Every now and then, however, they get a break and the bad headlines go to one of the other behemoth lenders. Today’s Wall of Shame honors go to Wells Fargo.

The Unites States Attorney in Manhattan, Preet Bahara, has charged Wells Fargo with a massive mortgage fraud scheme. The victims? You and I — U.S. taxpayers.

Bahara says that Wells Fargo certified tens of thousands of junk mortgages to the FHA and HUD. That meant when a loan went under – and bad loans usually do – taxpayers were left footing the bill.

Large lenders are allowed to certify loans as an FHA approved direct endorsement lender. That means the bank has agreed to follow certain rules and make sure all loan paperwork is in order. This includes proper appraisals, income verification, credit checks and making sure that the borrower has put down the required down payment. In return, the government guarantees the loan making it easier for loans to be resold to investors. Banks want to sell their loans so they have the money to lend again. The bank makes its money on commissions for each loan.

In theory, the practice makes sense. Wells Fargo, however, was cutting corners. Bahara says “…yet another bank has engaged in a longstanding and reckless trifecta of deficient training, deficient underwriting and deficient disclosure, all relying on the convenient backstop of government insurance.” Our thoughts are harsher.

Unfortunately, U.S. taxpayers are the one who write the check when an FHA insured mortgage defaults.

Wells Fargo will find it difficult to claim ignorance. According to the government’s complaint, Wells Fargo’s own Quality Assurance personnel repeatedly warned senior management of the problem but were ignored. Ultimately the case came to light when a whistleblower came forward.

The case was filed under the federal False Claims Act and the Financial Institutions Reform, Recovery and Enforcement Act (FIRREA). Both laws allow the whistleblower who reports the fraud to receive a sizable portion of what the government collects. Under the False Claims Act, that could be as high as 30%!

We are so happy that this story has a happy ending. In April 2016, Preet Bharara’s office settled with Wells Fargo. Although the bank didn’t have to admit to any wrongdoing, it did pay $1.2 billion.

In announcing the settlement, Bharara said,

“Today, Wells Fargo, one of the biggest mortgage lenders in the world, has been held responsible for years of reckless underwriting, while relying on government insurance to deal with the damage.  Wells Fargo has long taken advantage of the FHA mortgage insurance program, designed to help millions of Americans realize the dream of home ownership, to write thousands and thousands of faulty loans.  Driven to maximize profits, Wells Fargo employed shoddy underwriting practices to drive up loan volume, at the expense of loan quality.  Even though Wells Fargo identified through internal quality assurance reviews thousands of problematic loans, the Bank decided not to report them to HUD.  As a result, while Wells Fargo enjoyed huge profits from its FHA loan business, the government was left holding the bag when the bad loans went bust.  With today’s settlement, Wells Fargo has finally resolved the years-long litigation, adding to the list of large financial institutions against which this Office has successfully pursued civil fraud prosecutions.”

To date, Manhattan federal prosecutors have brought several cases against large lenders. Several were initiated by whistleblowers. The government has already settled similar claims against CitiMortgage for $158 million, Flagstar Bank for $132 million and Deutsche Bank for $202 million. The largest case, the government’s $2.4 billion claim against Allied Home Mortgage, remains pending. That case was originally filed by our office in April of 2011.

If you have information about fraud or misconduct resulting in a loss to taxpayers, you may be entitled to a sizable award. Don’t delay as often it is the first person who comes forward that gets paid. Although most of our cases are against lenders, fraud can occur in a wide variety of industries including health care (Medicare fraud), defense contracting and government procurement.

To receive a cash reward, a claimant must first file a suit in the name of the government. That case is sealed meaning it is kept confidential while the government investigates and decides if it wishes to become involved.

The rules are somewhat complex but the payouts are potentially huge. Rewards range from 15% to 30% of whatever the government collects from wrongdoers. In a $100 million case, that means a reward of between $15 million and $30 million. More importantly, whistleblowers help end the greed and drain on taxpayers.

For more information, visit our Wells Fargo whistleblower or FIRREA bank fraud posts. Ready to see if you qualify for a reward? Contact attorney Brian Mahany online, at or by telephone at (414) 704-6731. All inquiries are kept in strict confidence.