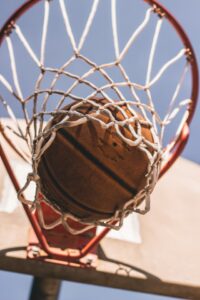 [Updated 2021] It’s no secret that our headquarters office is less than a half mile from the Bradley Center, home of the Milwaukee Bucks. Although not a basketball fan, its hard to miss when a former Bucks player is indicted for allegedly operating a Ponzi scheme. Prosecutors in Newark, New Jersey unsealed a four count wire fraud indictment today against Tate George.

George, who played for both the New Jersey Nets and the Bucks, is charged with defrauding investors out of $2 million. His victims? The U.S. Attorney says other professional athletes.

According to the indictment, George told investors he had a portfolio worth $500 million. At least some investors were told their money was going to real estate ventures and would be kept safe in an attorney trust account. If you think you know where the story is heading, you are right.

Much of the money reportedly went to his own personal bank account. In typical Ponzi scheme fashion, some of the money went to pay off old investors. Prosecutors say the company had no income producing projects. According to U.S. Attorney Paul Fishman, George used some of the money for clothes, restaurants and home improvements.

George is not the first sports star accused of theft nor are professional basketball players (or other athletes) immune from finding themselves as victims. What makes this case a little unusual is that George targeted his own – other athletes.

This type of fraud is known as an affinity fraud. That term is used to describe people who prey on members of particular group based on some identifiable characteristic such as religion, ethnicity or profession. Often the scam artists are members of the same group or at least pretend to be. Because they share an apparent affinity, the trust factor is usually much higher. Victims frequently let down their guard.

In some affinity frauds based on religion or ethnic groups, it becomes very hard for law enforcement to penetrate the group and detect the fraud before too many people are hurt. Witness the $33 million fraud last year caused by an Amish man who prayed on others in his same group.

If convicted Tate George is facing 20 years on each count. His actual sentence based on sentencing guidelines is likely to be much less.

Tate George Sentenced to 9 Years in Prison for Fraud

In January 2016, Tate George was sentenced to 108 months in federal prison. His sentence was unusual in that he received the maximum sentence possible. He was convicted in 2013 but his sentencing was delayed by several years.

After his sentencing, an FBI spokesperson said,

“By shamelessly cashing in on his celebrity C. Tate George stole $2 million from investors who trusted him as a former NBA athlete. George used the money to pay other investors in the Ponzi-style scheme and lined his pockets with the rest, funding extensive renovations on his home, paying for his daughter’s sixteenth birthday party and producing a reality video about himself.”

His sentencing became quite interesting after prosecutors said that some of the community letters sent on behalf Tate were phony. Some of the individuals who purportedly sent the letters signed declarations stating that they did not write the letters nor did they authorize the letters to be sent to the court on their behalf.

His problems still weren’t over. In 2019 the IRS assessed him penalties for not filing tax returns. While incarcerated, George continued to receive money from the NBA. Even while in prison, taxpayers are still required to file returns and pay taxes if they have income. The IRS said he failed to do so.

George continues to appeal and assert his innocence. To date, none of his appeals have been successful.

If you are the victim of an affinity fraud or Ponzi scheme, it is important to act quickly. Very often only the first to act receive any recovery from the fraudster. Finding a good fraud attorney is also important. Often a recovery can be made from a third party – examples include banks, insurance companies, accountants and  stockbrokers.

In George’s case, the money appears to have been spent. And there don’t appear to be any third parties who were responsible. That isn’t always the case, however.

The fraud recovery lawyers at Mahany Law have helped clients recover millions of dollars. If you are the victim of fraud, give us a call.  There is no obligation and the call is kept in complete confidence.

For more information, contact attorney Brian Mahany online, by email at or by phone 202.800.9791.