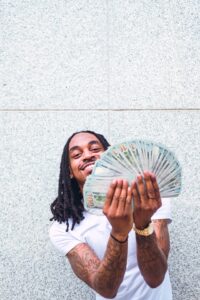 [With updates] Pastor Tyrone L. Gilliam claims to be a man of God, a hip-hop promoter and a TV personality. He also claims that he operates a successful investment firm. Now he can add being under indictment to his resume. Gilliam is accused of defrauding investors out of millions of dollars.

Investment fraud comes in many flavors. Prosecutors say that Gilliam was hawking STRIPS or “Separate Trading of Registered Interest and Principal of Securities. Essentially, a stockbroker “strips” away each of the future interest payments from a Treasury Bond and sells them on the secondary market. Instead of selling STRIPS, however, the government says he “stripped” investors of their hard earned money.

Gilliam claimed his system would yield returns of 5% per week. From a T note! That’s a definite red flag and one that wasn’t heeded by investors. One columnist calculated that with compound interest, Gilliam’s STRIPS claimed to yield more than 8953 times the underlying Treasury instrument yield.

We often see that victims of investment fraud don’t fully understand what they are investing in. Today’s complex derivative securities are often not even understood by brokers and the other financial professionals that sell them. Simple logic, however, should cause one to question how anyone could generate 5% weekly returns.

An old copy of Gillman’s website reveals that he “began a highly profitable business in artist and concert promotions.” So far, so good. We know that Gilliam’s claims to be a multitalented guy. The next sentence, however, causes concern: “Due to the extreme success of Tyrone’s concert promotions… he was able to purchase new cars, fine clothing, jewelry and cellular phones.”

Successful investment firms don’t brag about the ability of their principals to buy cars and fancy clothes!

Prosecutors claim that Gilliam used only a small portion of the money entrusted to him by investors to actually buy Treasury Strips. The rest of the money was wasted.

According to the Justice Department, in less than six months, Gilliams spent more than $1.6 million on an unrelated gold investment (much of that money being sent offshore to Ghana); more than $200,000 to purchase a commercial warehouse in Denver; at least $100,000 to buy or lease luxury cars; at least $50,000 for construction work on his home; at least $100,000 on luxury hotel and travel expenses; and more than $500,000 promoting both a festival called “Joy to the World” involving an album release party with Jamie Foxx at the Vault nightclub in Philadelphia, and culminating in a red carpet, black tie gala at the Philadelphia Ritz-Carlton, headlined for a $120,000 fee by Sean “Diddy” Combs, and a December 2010 December 2010 comedy performance in Nassau, Bahamas.

Gilliam’s website showed a map with dozens of red dots called “locations” scattered across the globe but no addresses. An investigative reporter for Reuters tracked down the global “headquarters” for Gilliam’s operation in Philadelphia. It’s a virtual office or what I would call a mail drop.

Perhaps the biggest red flag is that Gilliam was not registered with any of the regulatory agencies. If you sell commodities, stocks or securities you must be registered. The SEC, Financial Industry Regulatory Authority (FINRA) and CFTC all offer free online services to check the status and regulatory history of both individual stockbrokers / investment advisers and the firms that employ them.

One investor reportedly gave Gilliam $4 million. How does this happen? Hindsight is a wonderful thing and today that decision sounds ridiculous. Unfortunately, many Ponzi schemes are successful because the promoter pays off the first few investors. There is nothing more powerful than learning from friends that they DID earn 5% weekly returns.

The endorsement or success story that comes from a friend is often enough to override any logic we may possess.

Was Gilliam’s STRIPS scheme a scam? That’s up to God and a jury of Gilliam’s peers to determine.

Updates: Gilliam has faced judgment day in Heaven but a jury found him guilty of fraud. In October 2013 Gilliam was sentenced to 10 years in federal prison. Under federal sentencing guidelines, the minimum sentence should have been 12.5 years. His lawyer, Everette Scott, received 30 months.

Don’t Be the Next Investment Fraud Victim

There are two simple rules that will help you avoid almost every investment scam.

First, if the investment seems to good to be true, it probably is. If someone offers you an investment that pays 8953 times more than Treasury bills do, think twice. Actually, the better advice is to run.

Second, always perform due diligence before you invest. It’s one think to invest $5,000 in a crowd funding start up. But before you write a $4 million check or invest your life savings, some deep due diligence is necessary.

If you are making an investment through a broker, is he or she licensed? The SEC, FINRA and CFTC all have free, easy to use online tools that can help. Do a Google search as well.

Part of due diligence is common sense. We recently wrote about a prominent lawyer in South Florida convicted of rrunning a Ponzi scheme. He owned a 727, four Ferraris, an 87 foot yacht, a Rolls, a Bentley, three Lamborghinis and two Bugattis worth. He also had 28 city police officers on his payroll as body guards.  Does that sound over the top? It was and the money was coming from clients and investors.

If you are the victim of fraud call us. Investment fraud, securities fraud and phony welfare benefit schemes, we have seen it all. The fraud and asset recovery lawyers at Mahany Law help victims of fraud get back their hard earned money. Cases can often be handled on a contingent fee basis.

For more information, contact attorney Brian Mahany at online, by phone (202) 800 -9791 or by email at . All calls are confidential.