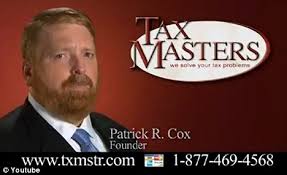 TaxMasters Goes Down in Flames, Owes Millions but Says Only Has $50,000 Left to Pay Customers.

Back in early October, I happily reported that the feds finally closed the doors on American Tax Relief. State authorities have been aggressively pursuing other questionable tax relief companies too such as J.K. Harris and attorney Roni Deutch. Welcome now Tax Masters to the ranks of tax relief companies being prosecuted.

According to the lawsuit filed by Minnesota, TaxMasters uses deceptive ads to lure in clients. (How many clients haven’t heard a tax relief pitch suggesting you can pay “just pennies on the dollar” to the IRS?)  Once clients contact the company, high pressure telemarketers push folks to pay between $2000 and $10,000 in up front fees. Clients are promised that former IRS professionals will work on their case. According to the lawsuit, virtually no one works on their case.

Update: Since this post was first written, the other states have stepped in as well. In March 2012, a Texas state court jury ordered TaxMasters to pay a $195 million judgment for violating the Texas Deceptive Trade Practices Act. Unfortunately the victory is probably a hollow one.

TaxMasters filed bankruptcy claiming it has thousands of creditors. According to its bankruptcy filing, it has assets of less than $50,000. When the FTC shut down American Tax Relief, consumers got back about 16 cents on the dollar. For people already in deeply in debt, a few pennies doesn’t help much.

Patrick Cox, the company’s founder, CEO and “guiding spirit” was hit with $46 million judgment but in 2014 a Texas Court of Appeals panel tossed that judgment. The three judge panel ruled there was no evidence to prove that Cox personally broke the law.

These scams are particularly disturbing in that they target people already having financial problems. People who were laid off, have medical problems or are losing their house frequently are the same people having problems paying their taxes.  By taking their last remaining savings, victims are left with no money and no tax relief.

Are all tax relief companies scam? Fortunately no. Nationally, only a small percentage of offers in compromise filed with the IRS are approved. Those that are approved are frequently submitted with the help of trained accountants and lawyers that specialize in tax matters, not TV hucksters advertising they can settle your tax debt for ” just $20″ or “pennies on the dollar.”

Mahany Law is a full service, national boutique law firm representing whistleblowers. If you work or worked at a tax relief company or a phony tax preparation firm and have inside information about fraud, you may be entitled a cash reward under the IRS Whistleblower Program. Eligible whistleblowers can receive up to 30% of whatever the IRS collects from wrongdoers.

Phony tax relief companies prey on people already struggling. We need your help to shut down these companies as quickly as possible.

Ready to see if you qualify for a reward? Contact attorney Brian Mahany online, by email or by phone today at (202) 800-9791. Cases accepted anywhere in the United States. All inquiries are kept strictly confidential.

And now for a trip down memory lane, here is an original TaxMasters ad. It must be true, right? After all it was seen on TV!