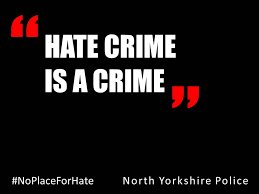 Burn a cross in the yard of a Black neighbor and you have committed a hate crime. Deface a local mosque or temple and you commit a hate crime but beat someone up solely because s/he is gay-as of today, that’s not a hate crime under federal law. That should soon change, however.

The U.S. House has overwhelmingly approved legislation adding crimes motivated by sexual orientation to the list of federally prohibited hate crimes. Activists have tried to enact such a law for the last 11 years. Each time they were thwarted by President Bush, conservative legislators or the inability to agree on language.

As both a law enforcement officer and prosecutor for much of my life, I frequently saw the aftermath of hate crimes. It wasn’t until 2002, however, when I witnessed a hate crime first hand. While driving across the Kennebec

River in Augusta, Maine. I observed three young men hurl bottles at a feeble, old homeless woman crossing the bridge with a shopping cart. I arrested those boys. In their twisted minds, she was “guilty” of being old and unemployed.

The court thought otherwise, enhancing their sentences because the crime was motivated by hatred. The behavior I witnessed that afternoon was pure evil; it was a hate crime.

Enhancing sentences if the crime is a so called hate crime makes perfect sense to most. Unless the victim is gay, bisexual or transgendered.

As a society, we have no problems enhancing penalties for people who abuse the elderly. We have little tolerance for skinheads and KKK-type behaviors and, thankfully, most of us do not have the religious bias that leads to mass violence and even genocide in other parts of the world. But getting the votes needed to protect gays from physical harm has taken more than a decade.

it is interesting to revisit history and see where the legislation really began. Although there had been talk about protecting gays from hate crimes for many years, the move to include sexual orientation as a protected class did not gain momentum until 1998. That year, Matthew Wayne Shepard was tortured and murdered near Laramie, Wyoming, because he was gay. His death, and the subsequent prosecution of his attackers, gripped the nation for several weeks.

Friends described Shepard as an optimistic young man who could relate to anyone. But his life was anything but easy. According to published reports, his torture and murder was not the only time he suffered from a vicious hate crime. Apparently, while on a high school trip to Morocco just a couple years earlier he was beaten and raped.

It was not until his death in October 1998 that his plight became known. Shortly after midnight on Oct. 7, 1998, Shepard accepted a ride from two local men. He was discovered 18 hours later after he had been beaten, robbed, pistol-whipped, tortured, tied to a fence and left to die. Shepard never regained consciousness. He died from his injuries days later, on Oct. 12.

The trial of Shepard’s attackers took many twists and turns. At one point, his attackers tried to raise a “gay panic defense;” that is, they claimed to be driven to temporary insanity by alleged sexual advances by Shepard.

The jury saw through that specious argument, however. Ultimately, one of his attackers pleaded guilty and the other was found guilty of felony murder after trial. Both men are serving life sentences.

Immediately after Shepard’s death, many called for Wyoming to enact its own hate-crimes law based on sexual orientation. The bill failed after a 30-30 tie in the Wyoming House of Representatives. President Bill Clinton renewed federal efforts at passing similar legislation a year later, in 1999. The bill passed but was ultimately killed in a conference committee. Years later, then-President George W. Bush indicated he might veto a similar bill.

In April 2009, the Matthew Shepard Act was debated on the floor of the House. With Matthew’s mother in the gallery, Rep. Virginia Foxx of North Carolina called the hate-crime labeling of Matt’s murder a hoax.

The Senate is expected to easily pass the measure and President Obama has promised to sign the bill.

Published blog comments on the current bill find that roughly one-third of the people commenting are hardened conservatives or simply anti-gay. Another third simply misunderstand the legislation and mistakenly believe it will prohibit the ability to preach or speak out against homosexuality.

Prohibiting the beatings, assaults and murder of people because of their race, religion or sexual orientation is a far cry from regulating free speech or one’s opinion. Rep. Tom Price, a conservative Republican, called the legislation a “disgrace” and said it amounted to creating “thought crimes.”

Personally, many would call such narrow-minded thinking an absolute disgrace. The new legislation isn’t about being gay or straight. It is not about the pros and cons of gay marriage. It’s about simply about protecting people from physical harm because of their values or beliefs. Discrimination based on sexual orientation has long been against the law in many jurisdictions. Once the Matthew Shepard Act is signed into law, committing a crime against someone simply because he or she is gay will soon be a hate crime anywhere in the nation.

Of note is how the bill is drafted. Congress wrote the law in a neutral fashion. The legislation protects against bias based on sexual orientation, not because one is gay. Under the law, a group of gays who beat a person because he or she was straight would also be guilty of a hate crime. It’s hard to argue that as drafted the law promotes homosexuality as several commentators have suggested. It simply favors people who wish their personal choice and privacy to be respected.

2018 Update: It’s been 2 decades since Matthew Wayne Shepard was killed. Despite numerous false starts, Wyoming still doesn’t have a hate crime law that includes the victim’s gender identity and preference. In fact, Wyoming is one of just five states without such a law. The others are Indiana, Arkansas, South Carolina and Georgia.
One of Shepard’s killers, Russell Henderson, was recently interviewed by the Associated Press. He certainly appeared remorseful during his interview. he insists, however, that when he and his co-defendant beat Shepard it was to steal money and possibly drugs. They said they were not motivated by his sexual orientation.
Whatever motivation Henderson may now claim, his partner in crime, Aaron McKinney, used homophobic slurs when confessing to the police. Whether or not that was true, Shepard’s grizzly murder changed America. As a country we woke up to sexual preference bias and discrimination. Unfortunately, that hatred is still alive and well 20 years after the death of Matthew Wayne Shepard.
As I write this update, Matthew’s parents moved his cremated remains to the National Cathedral. As hatred makes a resurgence in this country, his parents feared that vandals would desecrate his burial place in rural Wyoming. What a tragic sign of the times.
Shepard’s death was murder. Whether or not a hate crime is apparently still subject to dispute. While hate crimes are certainly a crime, most discrimination takes place in the workplace and not on the streets.

Sexual Orientation Discrimination in the Workplace